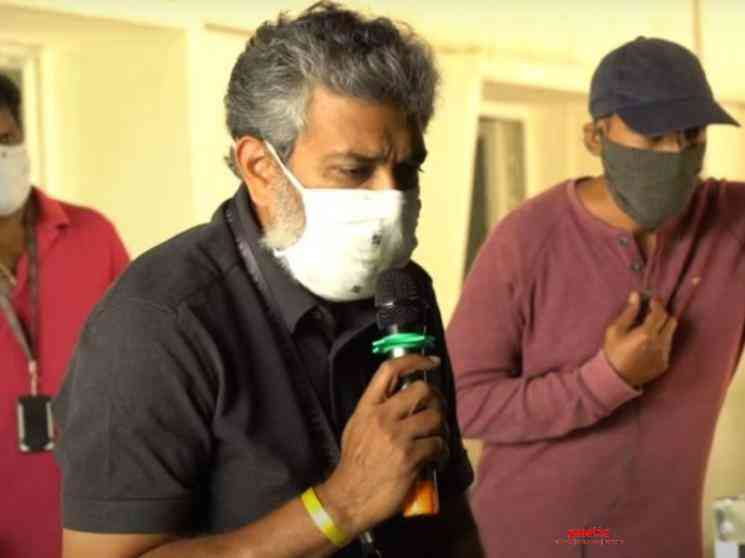 One of the most anticipated films right from the get go, blockbuster filmmaker SS Rajamoulis upcoming period action drama, RRR, starring Jr NTR and Ram Charan in the lead roles resumed shooting on Monday once again after a seven month break due to the coronavirus pandemic crisis. With non-stop shoot reportedly planned for the next two months, DVV Entertainment, the makers of the film announced that there is plenty that awaits fans next. In that light, a special making video from the team resuming production has now been released and shows Baahubali director SS Rajamouli calling the shots with the cast and crew working hard with double the grit considering shooting had to be compromised due to the COVID-19 outbreak. In the video, we see the crew reopening the gates to the humongous RRR film set, with many dusting off the vintage car, the rifles, including many other set pieces. We see workers arranging the costumes for the stars and the extras in the film, with SS Rajamouli giving the Action call before the footage ends with two actors - presumably stand ins for Ram Charan and Jr NTR coming on a motorbike and a horseback towards the camera screen - all amidst the team following the COVID-19 safety guidelines and protocols. The making video also informs fans that a special preview on Jr NTRs character, Komaram Bheem, will be out on October 22. SS Rajamoulis RRR has been riding on tremendous hype since the day it was announced considering both Jr NTR and Ram Charan are stars with massive firepower and a huge fan following respectively. The footage that was released not long back made the entire nation look back and take notice of the film considering there are plans to get it released in as many as 10 languages including Tamil and Hindi. Apart from Jr NTR and Ram Charan, RRR features Alia Bhatt as the female lead, with Bollywood superstar Ajay Devgn cast in an extended cameo, followed by Samuthirakani and Olivia Morris appearing as vital supporting characters, while Ray Stevenson and Alison Doody are reportedly playing the antagonists. The films budget is estimated to be around Rs. 350-400 crores and includes music by M. M. Keeravani. RRR is a fictitious story based on legendary freedom fighters, Alluri Seetharamaraju being portrayed by Ram Charan an.
WE RRR BACK - RRR Making video | SS Rajamouli | Jr NTR | Ram Charan | Ajay Devgn | Alia Bhatt. This article is published at 07 October 2020 05:56 from Galatta Latest Kannada Movie News, click on the read full article link below to see further details.