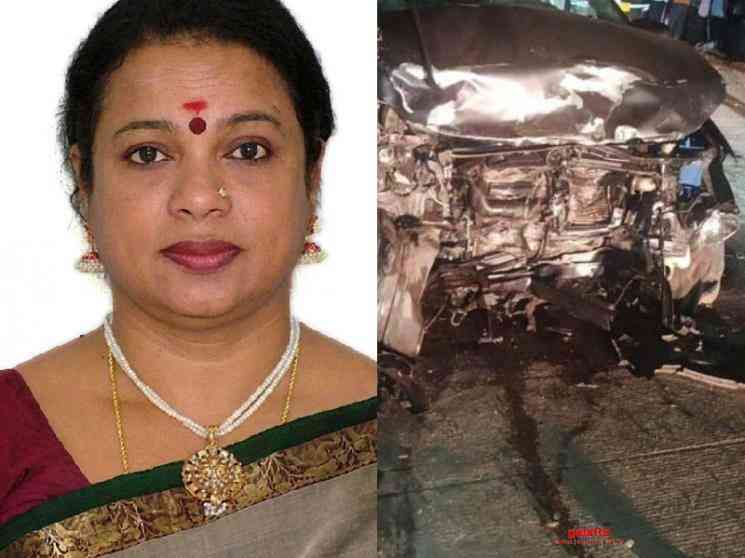 Popular Kannada actress and politician Umashrees car met with a tragic accident, a few days back (On November 21). Umashree did not travel in the car, but a young lady doctor named Smitha and her mother Shobha travelled in the car when it met with an accident. Umashrees Innova car crashed into another car at Pandiwada in Uppali Taluk, Karnataka and it was a tragic accident. Dr Smithas mother, Shobha and the car driver lost their lives on the spot, while Smitha was rushed to a private hospital with severe injuries. After battling for life for the past one week, Smitha breathed her last on Saturday (Nov 28) morning. Smithas demise has increased the number of casualties due to the accident to 3. All three of them who were inside Umashrees car are no more. The Innova car was also severely damaged and pictures of the damaged car is doing rounds on social media. Umashree had earlier visited the hospital to enquire on Dr Smithas health. A case has been filed and the Police officials are currently investigating the case. Umashree is a notable actress who has acted in over 400 Kannada movies, preferrably known for her comic roles. Umashree received the National Film Award for Best Actress in 2008 for her performance as Gulabi in the movie, Gulabi Talkies. Some of Umashrees notable films include Anubhava, Amrutha Ghalige, Naanu Nanna Hendthi, Maneye Manthralaya, 27 Mavalli Circle, Ee Bandha Anubandha, Ramanna Shamanna, Balondu Bhavageethe, Neenu Nakkare Haalu Sakkare, Poli Huduga, Doctor Krishna, Golmaal Radhakrishna, Gruhapravesha, Malashree Mamashree, Server Somanna, Kollura Sri Mookambika, Himapatha, Aarathi, Sipayi, Ibbara Naduve Muddina Aata, Thayavva, Preethsod Thappa, Krishna Leele, Chora Chittha Chora, Simhadriya Simha, Monalisa, Gulabi Talkies, Krishnan Love Story, Gilli, Bheema Theeradalli, Ambareesha, Love You Alia, and more. In 2013, Umashree became a Member of the Legislative Assembly under Siddaramaiahs Government where she was the Minister for Women and Child Development, Empowerment of the differently abled and senior citizens, Kannada language and culture..
Popular actress' car meets with a tragic accident - 3 people dead!. This article is published at 29 November 2020 07:10 from Galatta Latest Kannada Movie News, click on the read full article link below to see further details.